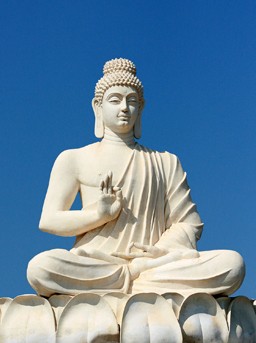 Kamadhenu also known as Surabhi, is a divine goddess described in Hinduism as the Cow of Wish. Kamadhenu is a cow of plenty who fulfills all the wish and is portrayed as the mother of all cows. Kamadhneu is also known as a Gayatri and worshipped as a heavenly cow. It is also known as Nanda, Sunanda, Surabhi, Susheela and Sumana. Kamdhenu Cow fulfills all the wishes of the worshipper. It gives health, wealth, happiness and growth in the life. Kamdhenu is the mother of all cattle. This cow lives in heaven and emerged from the ocean of milk (Khirsagar) during Samudra Manthan.

There are different stories related to Kamadhenu Cow. Different scriptures have different view regarding Kamdhenu Cow. Ramayana says that it is the daughter of sage Kashyapa and Krodhavasa. But according to Vishnu Puran, Kamdhenu cow, the cow of wish is the daughter of Daksha. According to Matsaya Puran, it is the consort of Brahma and the mother of the cow Yogishwari. The cow of wish is believed to be in the sanctuary of Goloka (The realms of cow) and in the Patala (Netherlands).

In Astrology also Kamadhenu Cow has a great significance. In astrology, the cow or bull depicts the Taurus. Taurus represents the earth, nature and all its boundaries. The Kamadhenu Cow nourishing feature is associated with the constellation Pushya which has a cow "milk giving udder.

kamadhenu Cow, " The mother of all Cow, can remove the distressful home atmosphere. It is a sacred cow, which is like a chariot of success. It can be kept at home or office according to Vastu direction. It removes excessive expense if placed in the south-west corner on any Monday. This Surabhi cow removes obstacle and hindrance in your life. It removes the problems form each and every sphere of life.

The sacred cow is worshipped as sacred animal and it is one form of Maha Vishnu. The house of the Kamadhenu Cow should be decorated after Ganesha Pooja. Arti should be performed in the same way as we perform arthi for Lord Vishnu.

If worshipped along with Her calf named "Nandini, is very auspicious. One who performs this pooja is adored by the blessings of Durga, Lakshmi and Saraswati.