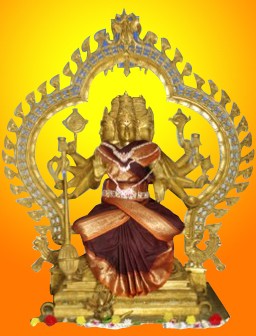 The Ashtadikpalakar are eight in number. As their collective name suggests, they rule the eight quarters or the eight directions of the universe. Ashta means eight, dik means quarters or directions and palas means rulers. According to Hinduism each quarter is assigned to a particular divinity, who presides over it and acts as its chief guardian spirit ensuring the orderliness (rta) of the universe and the protection of its occupants. (It is interesting to note that there are no goddesses in this list, just as there are none in the list of navagrahas also). Symbolically the eight rules of directions are represented as eight elephants standing in eight directions.

The concept of Ashtadikpalakar was a post vedic development. In the Vedic period it was the Adityas who ruled the skies and kept a watch over the world from one end to another. The Adityas knew all the deeds, because they had eyes and spies everywhere. The Adityas were born out of Aditi, the mother of all Gods. While the Adityas rule the skies, on earth it is Pusan, the handsome god with a shaft who knew the directions and who shows the paths that lead to green pastures and safe places. In the Rigvedic hymns we do not find any reference to the dikpalas. But as individual gods each of them enjoyed a supreme status and commanded his own following and veneration. But in the post Vedic period, fundamental changes took place in the Vedic religion. A new order emerged in the Vedic pantheon. Many gods lost their ranks while some completely disappeared. Probably the priests or the priestly families who specialized in their worship and invocation of gods moved elsewhere or turned to new gods. The Rigvedic Aryans migrated from inhospitable terrains to newer and safer lands with a more dependable climate and more hospitable terrain.The emphasis shifted from politics of isolation to politics of adjustment and compromise with native cultures. With the rise of bakthi cults such as Vaishnavam and Saivam, elaborate rituals yielded place to simple devotion to a personal god.The Vedic gods lost their significance during this period and reemerged as the dikpalakars.

Images of these gods can be seen in many temples on a central panel in the ceiling of the central pavilion (Mahamandapa) facing the main deity. If the temple is a symbol of God's abode, its ceiling is the sky. The Ashtadikpalakar are rightfully the guardians of the sky, watching over us from eight different directions and keeping an eye on all our activities.

The concept of Ashtadikpalakar symbolically denotes that God is every where and in every direction and that in whatever direction you proceed or offer your worship, you will ultimately find Him. In ancient times, when one had to travel through difficult terrains or dangerous forests, this belief would have been a great comforter. Many people are perhaps not aware that when we make an atma-pradakshina (revolving around one self) in front of God, we are not only saluting the self with in, the God in front, but also the divinities that are around us in all the directions. The knowledge of the Ashtadikpalakar became the basis for the evolution of the traditional Hindu science of design and construction called Vasthushastra. Vasthu-shastra means knowledge of things. It is actually a science which deals with how things should be organized in a particular location for the better flow of energies and blessings of divinities.

In ancient India it played an important role in the
1. construction of temples and places of worship,
2. location of various components of a house in relation to the street, city or town where it is located,
3. location and arrangement of various household things like furniture and utensils and arrangement of rooms,
doors and windows with in the house,
4. location of the farm fields and water tanks, how to position a dead body before and during cremation, the direction in which one should sleep or sit while performing a puja or a ceremony and so on.

Vashtushastra might have drawn its contents from various sources, knowledge of ancient mathematics, water divining, knowledge of the human body, construction of the ritual places, designing of yantras and the occult knowledge of sensing the flow of energy and so on. The Knowledge of the directions and its divinities was one of its core elements.

For example, many traditional Hindus believe that the north east corner of a room should be left vacant, because that direction belongs to Iswara. They would also prefer to do business facing north, because north is ruled by Kubera, the lord of wealth, and avoid facing the south generally, since the direction is ruled by Yama, the lord of death. People also would not prefer to construct their houses, with the main facade facing the south, since that would supposedly lead to physical and mental difficulties and disabilities for the occupants and the owners.

With the increasing pressures on the availability of space, problems of finance and construction, few people are able to comply with the specifications of this ancient science. Many educated Hindus ignore it completely and carry on their businesses as usual.