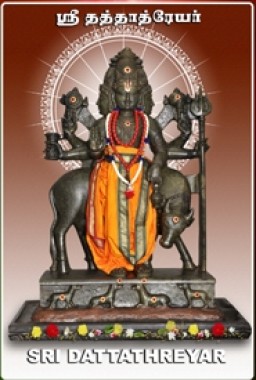 Lord Dattatreya was the son of the great sage Atri and his wife Anusuya Devi. He was the originator of certain magical rites and the creator of Soma plant. He was a teacher of non-Aryan people. Association with people of all strata and objects of pleasure made him more impure. But learning and enlightenment has made him so pure that nothing can ever stain him. Being the incarnation of the trinity, he is shown to have three heads, four hands and accompanied by four dogs of different colors representing the four Vedas.

By performing Sri Dattatreya Homam, one can win over their enemies, achievement and all money-oriented. It is very easy to please Sri Dattatreya by doing Jaapam, Homam. This Pooja is very effective in destroying the enemies and evils.Worshipping Sri Dattatreya confers great Material benefits,Worldly pleasures wealth and intelligence and can have the qualities of trinity, Brahma, Vishnu and Shiva.