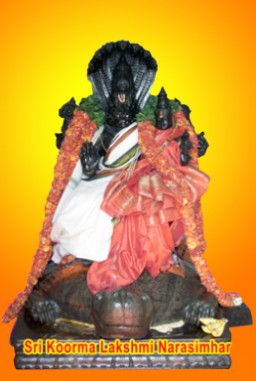 Lord Lakshmi Narasimha is the 4th incarnation of Lord Vishnu. His incarnation was done on the earth plane to bless people from the following:

What is done in Lakshmi Narasimha Homa?

Japas or mantras are recited accordingly for each Homa by a sacred group of priests who are authenticated, devoted and sincere. It is essential that a Japam (mantra) is spelled rightly for the right eff ect. And, our group of expert priests makes sure that they perform the Homa in the authentic and traditional way with the right syllable for the right effect!

It is known to spiritual people that at the end of every Homa, sacrificial ghee (clarified butter), clothes and other divine things are offered to the fi reAgni Devatha. Once the fire swallows all these divine offerings, it bestows the people assembled for the gathering and the performer with all that they ask for. It is believed that Lord Lakshmi Narasimha is present all over virtually and blesses and grants your wishes in person!

What Will I Receive?

Lakshmi Narasimha HomaBid a Farewell to your Enemies and Evil Eyes!

If you perform this Homa, you will be blessed with a health ailment free life. All your spiritual and material benefits will be accomplished and granted by Lord Lakshmi Narasimha himself. You are also bound to erase all your sins and proceed towards a sin free and uncomplicated future.