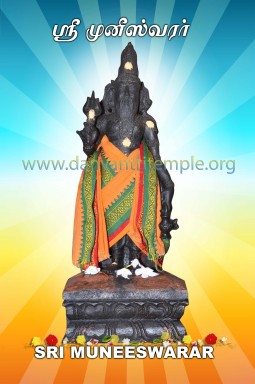 Munishswaran is a Tamil folk deity popular in northern Tamil Nadu, India. He is a male deity usually depicted as three stones or just one stone with religious marking. The deity is considered a family or village guardian. There are many versions of this deity popular in different parts of Tamil Nadu

Pal Muni is identified as a vegetarian deity who does not accept any animal sacrifice. He is preferred as the family deity by many. Houses usually depict him with three burnt bricks marked with three Śaiva strips of ashes and a red kumkum dot, made of turmeric and slaked lime, in the center.