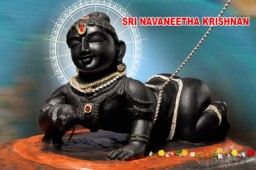 SANTHANA GOPALA HOMAM or PURUSHA SUKTHA HOMAM Dedicated to Lord Maha vishnu.None other than Lord Maha Vishnu himself bestowed knowledge of this homa on Sanatkumara, who in turn instructed this to sage Bodhayana. It is stated in the Suta Samhita. Putrapradam Aputraanaam Jayadam Jayakaaminaam Bhuktidam Bhuktikaamaanaam Mokshadam Moksha Kaaminaam meaning those who wish progeny, success in endeavors, worldly enjoyment and the final emancipation shall attain it by performing this.It is said that one attains this human birth by performing meritorious deeds in the past lives. In order to continue the lineage of ours it is necessary that we be blessed with healthy progeny. The Purusha sukta homa is said to be equal to the Putra kameshti yagna narrated in the Ramayana in providing healthy progeny to the performer. The hymn glorifies Lord Vishnu as the Purusha or the primordial being with innumerable heads, eyes and feet. The lord is depicted as the cause of all living beings. It further describes the manner in which different species occur from his various limbs. The hymns are sixteen in number.